Sunday, May 5th at 7:00PM CST another New Orleans Jazz & Heritage Festival came to an end at the Fair Grounds racetrack. Over 8 days and across 2 weekends, for attendees numbering around 475,000, a lineup of 688 acts performed – and notwithstanding the presence of some of the biggest names in music, roughly 600 of those came from New Orleans or southern Louisiana. And, with this edition, it has now been staged for exactly 50 years. In the opinion of many, it’s the single greatest music festival in all of America. I disagree, with a quibble: I think it may actually be the single greatest event of any kind.

The current and deserving king of New Orleans music, Trombone Shorty, closed the evening and the 2019 festivities on the main stage. But as a measure of the magnitude of Jazz Fest (as everyone knows it), the list of artists who also played across other of the 14 total stages at the very same time included John Fogarty, Herbie Hancock, Buddy Guy, The Mavericks, and local sensations, The Stooges Brass Band.

My own first Jazz Fest came in 1980, a decade after its very modest start in front of only a few hundred people at what’s now known as Congo Square. Oddly, I have a clear memory of just one performer from that day, the remarkable Clarence “Gatemouth” Brown, but maybe that’s because I was so blown away by his incredible show. Like the unparalleled city of New Orleans itself, Gatemouth Brown’s music was a mélange of so many different cultures and styles – Blues, Swing, Cajun, Country, R&B, Rock, Folk, and Big Band – and I believe he incorporated them all during his amazing set. Still, the single highlight for me came when Gatemouth, an acclaimed multi-instrumentalist, switched from guitar to fiddle and stomped through a series of jaw-dropping, Cajun/Zydeco-inflected tunes befitting his origins in the tiny southwest Louisiana town of Vinton, near the Texas border. His appearance probably lasted no more than an hour, but those 60 minutes were a definite musical marker for me, steering my already-existing love of music in an entirely new direction – a course set distinctly for New Orleans – which remains unmistakeable to this day, 40 years after it occurred, and as the 50th Jazz Fest is celebrated. All because of a guy named Clarence Brown, who was given the name “Gatemouth” in high school by a teacher who said he had a “voice like a gate.”

George Wein, the New Orleans Jazz & Heritage Festival producer at its inception, after having presented both the Newport Folk and the Newport Jazz Festivals, stamped the ideals and legacy of this truly unique American event right from the start, saying he had no interest in simply importing well-known musicians for jazz concerts in auditoriums. For him, the “heritage” aspect of the festival was paramount from the start. “We had in mind,” he said in a NY Times interview, “to create a permanent relationship with the culture of New Orleans.” Five decades in, let’s say: mission accomplished. Even more succinctly, Ivan Neville, leader of longstanding New Orleans funk band, Dumpstaphunk, and one of the city’s many second-generation talents as son of vocalist extraordinaire and Neville Brothers co-founder, Aaron Neville, stated plainly, “Jazz Fest is everything that you love about New Orleans to begin with.” Yeah you right, Ivan, as the New Orleanians like to say. Yeah you right, now for 50 years running. 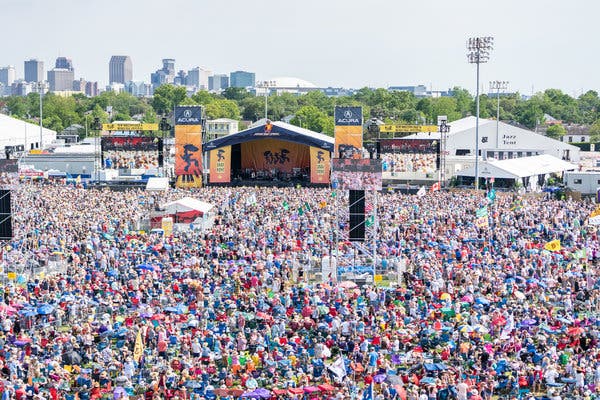